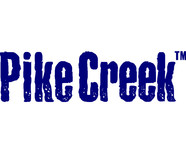 Pike Creek Whisky is a traditional Canadian whisky, and is distilled twice through small, copper stills. After distillation, the whisky is matured in first-use bourbon barrels, which are laid to rest in a warehouse in Pike Creek (a suburb of Windsor, Ontario) for an average of seven to eight years.

After the whisky has matured in used bourbon barrels, it is finished in barrels that were previously used to mature port. The port barrels add notes of sweet, dried fruits to the whisky, and provide for an additional layer of complexity.

Pike Creek Whisky is amber in color, and has a nose of dried fruits (particularly cherries and strawberries), along with a subtle, underlying peppery spice. The initial flavors are full and robust, with notes of toffee and vanilla, along with bursts of citrus and honey. The finish lingers, and ends with a note of spicy rye.


Back to Spirits: Whiskey