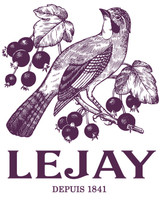 It was in 1841, in Dijon in the heart of Burgundy, that Auguste Denis Lagoute created the original Crème de Cassis. Henri Lejay, who married Elisabeth Lagoute, daughter of the founder, quickly made his mark in the family House. The Lejay and Lagoute families had sealed their destinies. Since then, generation to generation have joyfully paid homage to the nobility of the fruit.

Two different varietals of cassis or blackcurrant make Lejay’s original Crème de Cassis. Noir de Bourgogne is the most aromatic and rustic variety of blackcurrant. Black Down is a rounder, smoother and slightly sweeter variety. Both are harvested once a year during summer in Burgundy and other northern regions in France.  Lejay uses a special technique for delicately harvesting cassis in small trays, in order to avoid any phenomenon of unwanted crushing or quick fermentation, which could affect the taste of the fruit.

Upon its arrival to the house of Lejay Lagoute, the fruit de cassis receives an extensive quality review by the Maitre de Saveurs, who controls not only the temperature, but all of the elements of the long-established process, to create the best Crème de Cassis. The maitre de fruits et de saveurs brings out the freshness and complexity of the cassis by artfully combining a mélange of century-old traditional processes with proprietary stainless still maceration vats. After the slow maceration of the berries in small batch distilled French eau de vie, the solids are gently pressed and mixed with the free-run juice to create the “virgin mixture”. It is then decanted by gravity to avoid filtration and preserve the fullest flavor of the fruit.

Once this ‘passive’ maceration is completed for each varietal, they are blended together and French crystal sugar is added. The resulting spirit is then enhanced with a subtle touch of cassis bud infusion. This secret, natural ingredient reveals the inherent aromatics of berries and a distinct citrus finish with hints of grapefruit and exotic zest.

Lejay crème de cassis is versatile and mixes well with virtually all spirits, wines and Champagne. It is delightful on its own in sparkling water, with fresh juices and teas. It is also a flawless compliment in countless classic cocktail templates including aperitif, stirred and sour. A clean berry nose, a gentle and soft yet complex mouth, with distinctive creamy texture and a long finish. Lejay is memorable.


Back to Spirits: Liqueurs